1.Break-down in verbal communication is described as
(A) Short circuit
(B) Contradiction
(C) Unevenness
(D) Entropy

2.The Telephone Model of Communication was first developed in the area of
(A) Technological theory
(B) Dispersion theory
(C) Minimal effects theory
(D) Information theory

5. The grains that appear on a television set when operated are also referred to as
(A) sparks
(B) green dots
(C) snow
(D) rain drops

6. In circular communication, the encoder becomes a decoder when there is
(A) noise
(B) audience
(C) criticality
(D) feedback

8. In certain coding method, the word QUESTION is encoded as DOMESTIC. In this coding, what is the code word for the word RESPONSE ?
(A) OMESUCEM
(B) OMESICSM
(C) OMESICEM
(D) OMESISCM

13. “If a large diamond is cut up into little bits, it will lose its value just as an army is divided up into small units of soldiers, it loses its strength.”  The argument put above may be called as
(A) Analogical
(B) Deductive
(C) Statistical
(D) Causal

15. If two propositions having the same subject and predicate terms can both be true but can not both be false, the relation between those two propositions is called
(A) contradictory
(B) contrary
(C) subcontrary
(D) subaltern 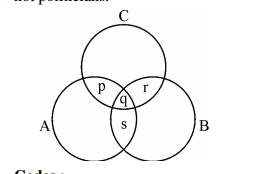 
Read the following table carefully. Based upon this table answer questions from 18 to 22 : Net Area under Irrigation by sources in a country (Thousand Hectares) 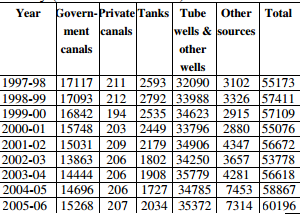 27. Which one of the following is not the same as the other three ?
(A) MAC address
(B) Hardware address
(C) Physical address
(D) IP address

30. Which of the following cities has been worst affected by urban smog in recent times ?
(A) Paris
(B) London
(C) Los Angeles
(D) Beijing

36. Which one of the following green house gases has the shortest residence time in the atmosphere ?
(A) Chlorofluorocarbon
(B) Carbon dioxide
(C) Methane
(D) Nitrous oxide

37. Consider the following statements and select the correct answer from the code given below :
i. Rajasthan receives the highest solar radiation in the country.
ii. India has the fifth largest installed wind power in the world.
iii. The maximum amount of wind power is contributed by Tamil Nadu.
iv. The primary source  of uranium in India is Jaduguda.
Codes :
(A) i and ii
(B) i, ii and iii
(C) ii and iii
(D) i and iv

38. Who among the following is the de facto executive head of the Planning Commission ?
(A) Chairman
(B) Deputy Chairman
(C) Minister of State for Planning
(D) Member Secretary

42. Which of the following universities has adopted the meta university concept ?
(A) Assam University
(B) Delhi University
(C) Hyderabad University
(D) Pondicherry University

44. Which one of the following is considered a sign of motivated teaching ?
(A) Students asking questions
(B) Maximum attendance of the students
(C) Pin drop silence in the classroom
(D) Students taking notes

45. Which one of the following is the best method of teaching ?
(A) Lecture
(B) Discussion
(C) Demonstration
(D) Narration

47. The e-content generation for undergraduate courses has been assigned by the Ministry of Human Resource Development to
(A) INFLIBNET
(B) Consortium for Educational Communication
(C) National Knowledge Commission
(D) Indira Gandhi National Open University

49. Who among the following, propounded the concept of paradigm ?
(A) Peter Haggett
(B) Von Thunen
(C) Thomas Kuhn
(D) John K. Wright

50. In a thesis, figures and tables are included in
(A) the appendix
(B) a separate chapter
(C) the concluding chapter
(D) the text itself

52. The research approach of Max Weber to understand how people create meanings in natural settings is identified as
(A) positive paradigm
(B) critical paradigm
(C) natural paradigm
(D) interpretative paradigm

53. Which one of the following is a nonprobability sampling ?
(A) Simple random
(B) Purposive
(C) Systematic
(D) Stratified

54. Identify the category of evaluation that assesses the learning progress to provide continuous feedback to the students during instruction.
(A) Placement
(B) Diagnostic
(C) Formative
(D) Summative

Read the following passage carefully and answer questions 56 to 60 :
Traditional Indian Values must be viewed both from the angle of the individual and from that of the geographically delimited agglomeration of peoples or groups enjoying a common system of leadership which we call the ‘State’. The Indian ‘State’s’ special feature is the peaceful, or perhaps mostly peaceful, co-existence of social groups of various historical provenances which mutually adhere in a geographical, economic, and political sense, without ever assimilating to each other in social terms, in ways of thinking, or even in language. Modern Indian law will determine certain rules, especially in relation to the regime of the family, upon the basis of how the loin-cloth is tied, or how the turban is worn, for this may identify the
litigants as members of a regional group, and therefore as participants in its traditional law,though their ancestors left the region three or four centuries earlier. The use of the word ‘State’ above must not mislead us. There was no such thing as a conflict between the individual and the State, atleast before foreign governments became established, just as there was no concept of state ‘sovereignty’ or of any church-and-state dichotomy. Modern Indian ‘secularism’ has an admittedly peculiar feature : It requires the state to make a fair distribution of attention and support amongst all religions. These blessed aspects of India’s famed tolerance (Indian kings so rarely persecuted religious groups that the exceptions prove the rule) at once struck Portuguese and other European visitors to the West Coast of India in the sixteenth century, and the impression made upon them in this and other ways gave rise, at one remove, to the basic constitution of Thomas More’s Utopia. There is little about modern India that strikes one at once as Utopian : but the insistence upon the inculcation of norms, and the absence of bigotry and institutionalized exploitation of human or natural resources, are two very different features which link the realities of India and her tradition with the essence of all Utopians.

58. Which one is the peculiar feature of modern Indian ‘Secularism’ ?
(A) No discrimination on religious considerations
(B) Total indifference to religion
(C) No space for social identity
(D) Disregard for social law

59. The basic construction of Thomas More’s Utopia was inspired by
(A) Indian tradition of religious tolerance.
(B) Persecution of religious groups by Indian rulers.
(C) Social inequality in India.
(D) European perception of Indian State.

60. What is the striking feature of modern India ?
(A) A replica of Utopian State
(B) Uniform laws
(C) Adherence to traditional values
(D) Absence of Bigotry