1. A research paper is a brief report of research work based on

(A) Primary Data only

(B) Secondary Data only

(C) Both Primary and Secondary Data

2. Newton gave three basic laws of motion. This research is categorized as

3. A group of experts in a specific area of knowledge assembled at a place and prepared a syllabus for a new course. The process may be termed as

4. In the process of conducting research “Formulation of Hypothesis” is followed by

(A) Statement of Objectives

(B) Analysis of Data

Read the following passage carefully and answer questions 5 to 10:

All historians are interpreters of text if they be private letters, Government records or parish birthlists or whatever. For most kinds of historians, these are only the necessary means to understanding something other than the texts themselves, such as a political action or a historical trend, whereas for the intellectual historian, a full understanding of his chosen texts is itself the aim of his enquiries. Of course, the intellectual history is particularly prone to draw on the focus of other disciplines that are habitually interpreting texts for purposes of their own, probing the reasoning that ostensibly connects premises and conclusions. Furthermore, the boundaries with adjacent subdisciplines are shifting and indistinct: the history of art and the history of science both claim a certain autonomy, partly just because they require specialised technical skills, but both can also be seen as part of a wider intellectual history, as is evident when one considers, for example, the common stock of knowledge about cosmological beliefs or moral ideals of a period.

Like all historians, the intellectual historian is a consumer rather than a producer of ‘methods’. His distinctiveness lies in which aspect of the past he is trying to illuminate, not in having exclusive possession of either a corpus of evidence or a body of techniques. That being said, it does seem that the label ‘intellectual history’ attracts a disproportionate share of misunderstanding.

It is alleged that intellectual history is the history of something that never really mattered. The long dominance of the historical profession by political historians bred a kind of philistinism, an unspoken belief that power and its exercise was ‘what mattered’. The prejudice was reinforced by the assertion that political action was never really the outcome of principles or ideas that were ‘more flapdoodle’. The legacy of this precept is still discernible in the tendency to require ideas to have ‘licensed’ the political class before they can be deemed worthy of intellectual attention, as if there were some reasons why the history of art or science, of philosophy or literature, were somehow of interest and significance than the history of Parties or Parliaments. Perhaps in recent years the mirror-image of this philistinism has been more common in the claim that ideas of any one is of systematic expression or sophistication do not matter, as if they were only held by a minority.

(A) the chosen texts of his own

Answer: (A) the chosen texts of his own

6. Intellectual historians do not claim exclusive possession of

(B) any corpus of evidence

7. The misconceptions about intellectual history stem from

(A) a body of techniques

(B) the common stock of knowledge

(C) the dominance of political historians

(A) Reinforcement of prejudice

(B) Fabrication of reasons

(C) The hold of land-owning classes

(D) Belief that power and its exercise matter

Answer: (D) Belief that power and its exercise matter

9. Knowledge of cosmological beliefs or moral ideas of a period can be drawn as part of

(B) history of science

10. The claim that ideas of any one is of systematic expression do not matter, as if they were held by a minority, is

(B) a political action

(C) a philosophy of literature

(D) the mirror-image of philistinism

Answer: (D) the mirror-image of philistinism

11. Public communication tends to occur within a more

12. Transforming thoughts, ideas and messages into verbal and non-verbal signs is referred to as
(A) channelisation

14. A major barrier in the transmission of cognitive data in the process of communication is an individual’s

16. In mass communication, selective perception is dependent on the receiver’s

22. The price of oil is increased by 25%.  If the expenditure is not allowed to increase, the ratio between the reduction in consumption and the original consumption is

23. How many 8’s are there in the following sequence which are preceded by 5 but not immediately followed by 3 ?

24. If a rectangle were called a circle, a circle a point, a point a triangle and a triangle a square, the shape of a wheel is

25. Which one of the following methods is best suited for mapping the distribution of different crops as provided in the standard classification of crops in India ?

26. Which one of the following does not come under the methods of data classification ?

27. Which one of the following is not a source of data ?

28. If the statement ‘some men are cruel’ is false, which of the following statements/statement are/is true ?

(iii) Some men are not cruel.

29. The octal number system consists of the following symbols :

(D) None of these

Answer: (D) None of these

31. DNS in internet technology stands for

(D) None of these

(D) All of the above

34. Which of the following statements is true ?

(A) Smart cards do not require an operating system.

(B) Smart cards and PCs use some operating system.

(D) The communication between reader and card is in full duplex mode.

Answer: (B) Smart cards and PCs use some operating system.

35. The Ganga Action Plan was initiated during the year

36. Identify the correct sequence of energy sources in order of their share in the power sector in India :

37. Chromium as a contaminant in drinking water in excess of permissible levels, causes

38. The main precursors of winter smog are

(A) N2O and hydrocarbons

(B) NOx  and hydrocarbons

(C) SO2  and hydrocarbons

Answer:  (B) NOx  and hydrocarbons

39. Flash floods are caused when

(B) the atmosphere is stable

(C) the atmosphere is convectively unstable with no vertical windshear

Answer: (A) the atmosphere is convectively unstable and there is considerable vertical wind shear

40. In mega cities of India, the dominant source of air pollution is

41. The first Open University in India was set up in the State of

42. Most of the Universities in India are funded by

(A) the Central Government

(B) the State Governments

43. Which of the following organizations looks after the quality of Technical and Management education in India ?

(A) The principle of natural justice is followed by the Courts.

(B) Justice delayed is justice denied.

(C) Natural justice is an inalienable right of a citizen

(D) A reasonable opportunity of being heard must be given.

Answer:  (C) Natural justice is an inalienable right of a citizen

45. The President of India is

(A) the Head of State

(B) the Head of Government

46. Who among the following holds office during the pleasure of the President of India ?

(B) Comptroller and Auditor General of India

(D) Governor of a State

Answer:  (D) Governor of a State

Not for Visually Handicapped Candidates

Questions 47 to 49 are based upon the following diagram in which there are three interlocking circles A, P and S where A stands for Artists, circle P for Professors and circle S for Sportspersons.

Different regions in the figure are lettered from a to f: 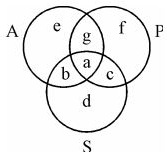 47. The region which represents artists who are neither sportsmen nor professors.

48. The region which represents professors, who are both artists and sportspersons.

49. The region which represents professors, who are also sportspersons, but not artists.

Questions 50 to 52 are based on the following data :

50. The value of X, which is exceeded 10% of the time in the duration of measurement, is

51. The value of X, which is exceeded 90% of the time in the duration of measurement, is

52. The value of X, which is exceeded 50% of the time in the duration of measurement, is

53. For maintaining an effective discipline in the class, the teacher should

(B) Deal with the students strictly.

(C) Give the students some problem to solve.

(D) Deal with them politely and firmly.

Answer: (D) Deal with them politely and firmly

54. An effective teaching aid is one which

(A) is colourful and good looking

(B) activates all faculties

(C) is visible to all students

(D) easy to prepare and use

Answer:  (B) activates all faculties

55. Those teachers are popular among students who

(A) develop intimacy with them

(B) help them solve their problems

Answer: (B) help them solve their problems

56. The essence of an effective classroom environment is

(A) a variety of teaching aids

57. On the first day of his class, if a teacher is asked by the students to introduce himself, he should

(A) ask them to meet after the class

(B) tell them about himself in brief

(D) scold the student for this unwanted demand

Answer:  (B) tell them about himself in brief

58. Moral values can be effectively inculcated among the students when the teacher

(A) frequently talks about values

(B) himself practices them

(D) talks of Gods and Goddesses

Answer:  (B) himself practices them

59. The essential qualities of a researcher are

(A) spirit of free enquiry

(B) reliance on observation and evidence

(C) systematization or theorizing of knowledge

(D) all the above

Answer: (D) all the above

Which of the above are correct ?