1. Choose the proper alternative given in the codes to replace the question mark

3. A definition put forward to resolve a dispute by influencing attitudes or stirring emotions is called

4. Which of the codes given below contains only the correct statements?

(i) Venn diagram is a clear method of notation.

(ii) Venn diagram is the most direct method of testing the validity of categorical syllogisms.

(iii) In Venn diagram method the premises and the conclusion of a categorical syllogism is diagrammed.

(iv) In Venn diagram method the three overlapping circles are drawn for testing a categorical syllogism.

(A) Unity in human nature.

(B) Integrity in human nature.

Read the table below and based on this table answer questions from 6 to 11:
Area under Major Horticulture Crops (in lakh hectares) 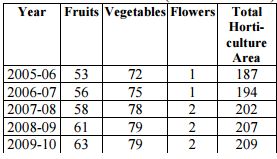 6.  Which of the following two years have recorded the highest rate of increase in area under the total horticulture?

10. What has been the share of area under fruits, vegetables and flowers in the area under total horticulture in 2007-08?

11. In which year, area under fruits has recorded the highest rate of increase?

(A) work with web

(D) worth while web

13. A hard disk is divided into tracks which is further subdivided into

14. A computer program that translates a program statement by statement into machine languages is called a/an

16. A Compiler is a software which converts

(A) characters to bits

(A) an extremely large main memory.

(B) an extremely large secondary memory.

(D) a type of memory used in super computers.

18. The phrase “tragedy of commons” is in the context of

(A) tragic even related to damage caused by release of poisonous gases.

(B) tragic conditions of poor people.

19. Kyoto Protocol is related to

20. Which of the following is a source of emissions leading to the eventual formation of surface ozone as a pollutant?

(B) Refrigeration and Air-conditioning

21. The smog in cities in Indian mainly consists of

(A) Oxides of sulphur

(B) Oxides of nitrogen and unburnt hydrocarbons

(D) Oxides of sulphur and ozone

22. Which of the following types of natural hazards have the highest potential to cause damage to humans?

23. The percentage share of renewable energy sources in the power production in India is around

24. In which of the following categories the enrolment of students in higher education in 2010-11 was beyond the percentage of seats reserved?

25. Which one of the following statements is not correct about the University Grants Commission (UGC)?

(B) It is tasked with promoting and coordinating higher education.

(C) It receives Plan and Non-Plan funds from the Central Government.

(D) It receives funds from State Governments in respect of State Universities.

26. Consider the statement which is followed by two arguments (I) and (II):

Statement: Should India switch over to a two party system?

(I) Yes, it will lead to stability of Government.

(II) No, it will limit the choice of voters.

(C) Both the arguments are strong.

(D) Neither of the arguments is strong.

27. Consider the statement which is followed by two arguments (I) and (II):

Statement: Should persons with criminal background be banned from contesting elections?

Arguments:     (I) Yes, it will decriminalize politics.

(II) No, it will encourage the ruling party to file frivolous cases against their political opponents.

(C) Both the arguments are strong.

(D) Neither of the arguments is strong.

28. Which of the following statement(s) is/are correct about a Judge of the Supreme Court of India?

1) A Judge of the Supreme Court is appointed by the President of India.

2) He holds office during the pleasure of the President.

3) He can be suspended, pending an inquiry.

4) He can be removed for proven misbehaviors or incapacity.

Select the correct answer from the codes given below:

29. In the warrant of precedence, the Speaker of the Lok Sabha comes next only to

30. The black-board can be utilized best by a teacher for

(A) Putting the matter of teaching in black and white

(B) Making the students attentive

(D) Highlighting the teacher himself.

31. Nowadays the most effective mode of learning is

32. At the primary school stage, most of the teachers should be women because they

(A) can teach children better than men.

(C) are available on lower salaries.

(D) can deal with children with love and affection.

33. Which one is the highest order of learning?

34. A person can enjoy teaching as a profession when he

(A) has control over students.

(B) commands respect from students.

(C) is more qualified than his colleagues.

35. “A diagram speaks more than 1000 words.” The statement means that the teacher should

(A) use diagrams in teaching.

(B) speak more and more in the class.

(C) use teaching aids in the class.

(D) not speak too much in the class.

(A) is a compilation of information on a topic.

(B) contains original research as deemed by the author.

(C) contains peer-reviewed original research or evaluation of research conducted by others.

(D) can be published in more than one journal.

37. Which one of the following belongs to the category of good ‘research ethics’?

(A) Publishing the same paper in two research journals without telling the editors.

(B) Conducting a review of the literature that acknowledges the contributions of other people in the relevant field or relevant prior work.

(C) Trimming outliers from a data set without discussing your reasons in a research paper.

(D) Including a colleague as an author on a research paper in return for a favor even though the colleague did not make a serious contribution to the paper.

38. Which of the following sampling methods is not based on probability?

39. Which one of the following references is written as per Modern Language Association (MLA) format?

(A) a conference for discussion on a topic.

(B) a meeting for discussion on a topic.

(C) a class at a college or a university in which a teacher and the students discuss a topic.

(D) a brief intensive course for a small group emphasizing the development of a skill or technique for solving a specific problem.

41. A working hypothesis is

(A) a proven hypothesis for an argument.

(B) not required to be tested.

Read the following passage carefully and answer the questions (42 to 47):

The Taj Mahal has become one of the world’s best known monuments. This domed white marble structure is situated on a high plinth at the southern end of four-quartered garden, evoking the gardens of paradise, enclosed within walls measuring 305 by 549 meters. Outside the walls, in an area known as Mumtazabad, were living quarters for attendants, market, serials and other structures built by local merchants and nobles. The tomb complex and the other imperial structures of Mumtazabad were maintained by the income of thirty villages given specifically for the tomb’s support. The name Taj Mahal is unknown in Mughal chronicles, but it is used by contemporary Europeans in India, suggesting that this was the tomb’s popular name. in contemporary texis, it is generally called simply the illuminated Tomb (Rauza-i-Munavvara).

Mumtaz Mahal died shortly after delivering her fourteenth child in 1631. The Mughal court was then residing in Buhanpur. Her remains were temporarily buried by the grief stricken emperor in a spacious garden known as Zainabad on the bank of the river Tapti. Six months later her body was transported to Agra, where it was interred in land chosen for the mausoleum. This land, situated south of the Mughal city on the bank of the Jamuna, had belonged to the Kachwaha rajas since the time of Raja Man Singh and was purchased from the then current raja, Jai Singh. Although contemporary chronicles indicate Jai Singh’s willing cooperation in this exchange, extant farmans (imperial commands) indicate that the final price was not settled until almost two years after the mausoleum’s commencement. Jai Singh’s further cooperation was insured by imperial orders issued between 1632 and 1637 demanding that the provide stone masons and carts to transport marble from the mines at Makrana, within his “ancestral domain”, to Agra where both the Taj Mahal and Shah Jahan’s additions to the Agra fort were constructed concurrently.

Work on the mausoleum was commenced early in 1632. Inscriptional evidence indicates much of the tomb was completed by 1636. By 1643, when Shah Jahan most lavishly celebrated the ‘Urs ceremony for Mumtaz Mahal’, the entire complex was virtually complete.

42. Marble stone used for the construction of te Taj Mahal was brought from te ancestral domain of Raja Jai Singh. The name of the place where mines of marble is

43. The popular name Taj Mahal was given by

44. Point out the true statement from the following:

(A)  Marble was not used for the construction of the Taj Mahal.

(B) Red sand stone is non-visible in the Taj Mahal complex.

(C) The Taj Mahal is surrounded by a four-quatered garden known as Chahr Bagh.

(D) The Taj Mahal was constructed to celebrate the “Urs ceremony for Mumtaz Mahal”.

45. In the contemporary texts the Taj Mahal is known

46. The Construction of the Taj Mahal was completed between the period

47. The documents indicating the ownership of land, where the Taj Mahal was built, known as

48. In the process of communication, which one of the following is in the chronological order?

49. Bengal Gazette, the first Newspaper in India was started in 1780 by

50. Press censorsip in India was imposed during the tenure of the Prime Minister

51. Communication via New media such as computers, teleshopping, internet and mobile telephony is termed as

52. Classroom communication of a teacher rests on the principle of

55. In a certain cricket tournament 45 matches were played. Each team played once against each of the other teams. The number of teams participated in the tournament is

56. The missing number in the series

57. The odd numbers from 1 to 45 which are exactly divisible by 3 are arranged in an ascending order. The number at 6th position is

59. If the radius of a circle is increased by 50%, the perimeter of the circle will increased by

60. If the statement ‘some men are honest’ is false, which among the following statements will be true. Choose the correct code given below:

(i) All men are honest

(ii) No men are honest

(iii) Some men are not honest.

(iv) All men are dishonest.