1. Assertion (A): Biosphere constitutes an excellent life-support system which is sustainable and can fulfil all human needs.
Reason (R): The size and productivity of the Biosphere is limited by availability of water, nutrients and environmental conditions.
Identify the correct code:
Codes:
(A) Both (A) and (R) are true and (R) is the correct explanation of (A).
(B) Both (A) and (R) are true, but (R) is not the correct explanation of (A).
(C) (A) is true but (R) is false.
(D) (A) is false but (R) is true.
Answer: (D)

4. When the full potential of physical, chemical and biological factors, a species can use if there is no competition, it is called
(A) Fundamental niche
(B) Ecological niche
(C) Realized niche
(D) Competitive exclusion
Answer: (A)

5. The uppermost zone of atmosphere of earth, where shortwave ultraviolet radiations are absorbed, is
(A) Troposphere
(B) Stratosphere
(C) Mesosphere
(D) Thermosphere
Answer: (D)

6. which of the following oxides of nitrogen is the major air pollutant released from automobile exhausts?
(A) NO
(B) N2O
(C) NO2
(D) N2O3
Answer: (A)

9. Which of the following species in the atmosphere is called atmospheric detergent?
(A) Chlorine radical
(B) Hydroxyl radical
(C) Methyl radical
(D) Ozone radical
Answer: (B)

12. Which of the following organisms can act as primary consumer, secondary consumer, tertiary consumer or scavenger in different types of food chains?
(A) Raven
(B) Tiger
(C) Snake
(D) Phytoplanktones
Answer: (A)

13. The tendency of biological systems to resist change and to remain in a state of equilibrium is called
(A) Homeostatis
(B) Feedback mechanism
(C) Ecological efficiency
(D) Carrying capacity
Answer: (A)

15. Which of the following is not a type of ex situ conservation method?
(A) Botanical garden
(B) Zoological park
(C) Wildlife sanctuaries
(D) Gene banks
Answer: (C)

17. Preparation of hazard-zoning map in case of landslide prone regions involves comprehensive investigation of
(A) Details of structural and lithological settings.
(B) Geomorphic features relating to instability of slopes.
(C) Seismicity pattern of the region.
(D) all of the above.
Answer: (D)

18. If ap = specified value of peak acceleration, N = mean rate of occurrence of earthquake per year, tep = time interval of consideration (exposure period) and Fap = probability that an observed acceleration is less than or equal to ap, then the cumulative probability distribution of peak acceleration for epoch – dependent seismic hazard map is given by which formula ?
(A) Fmaxtep = exp {–Nt(1 – Fap)}
(B) Fmax = exp {–Nt(1 – Fap)} . tep
(C) Fmaxtep= exp {–t(1 – Fap)N}
(D) All of the above
Answer: (A)

19. Assertion (A): In oceans, Na has the longest residence time, within an order of magnitude of the age of the oceans.
Reason (R): The long residence time of Na reflects a lack of reactivity of sodium in the marine environment by not being readily incorporated in the common sedimentary minerals, nor being removed by biological reactions.
Identify the correct code:
Codes:
(A) Both (A) and (R) are true and (R) is the correct explanation of (A).
(B) Both (A) and (R) are true, but (R) is not the correct explanation of (A).
(C) (A) is true, but (R) is false.
(D) (A) is false, but (R) is true.
Answer: (A)

28. Human activities add 7-9 gigatons of CO2 per annum into the atmosphere. Major contributor to this CO2 is
(A) Burning of fossil fuels
(B) Clearing of forests for agriculture
(C) Fermentation industries
(D) Cement industries
Answer: (A)

30. Wilting coefficient of a loam represents
(A) The minimum water content of the soil at which plants can no longer obtain water
(B) Water holding capacity
(C) Capillary water
(D) Field capacity
Answer: (A)

31. Which one of the following techniques can be used for determining the level of cadmium in soil?
(A) UV – Visible spectrophotometer
(B) Atomic Absorption Spectrophotometer
(C) XRD
(D) IR spectrometer
Answer: (B)

38. Public hearing is conducted
(A) Prior to site selection
(B) Prior to approval of Terms of Reference
(C) After preparation of EIA
(D) After environmental clearance
Answer: (C)

42. The following statistical test is used to ascertain whether there is significant difference between the variances of two sets of observations:
(A) t-test
(B) F-test
(C) Chi square test
(D) Regression
Answer: (B) 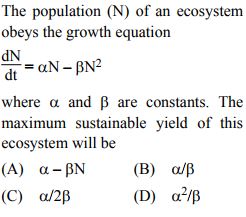 47. United Nations Conference on Environment, also termed as Earth Summit, was held in 1992 in which city?
(A) Rio de Janeiro
(B) Kyoto
(C) Stockholm
(D) Copenhagen
Answer: (A)

48. In which part of India, the tropical Western Ghats are situated?
(A) Punjab
(B) Rajasthan
(C) Gujarat
(D) Kerala
Answer: (D)