1. A demand curve, which is parallel to the horizontal axis, showing quantity, has the price elasticity equal to
(A) Zero
(B) Infinity
(C) Less than one
(D) One
Answer: (B)

2. Although a monopolist can charge any price he likes, but does not charge a higher price than his equilibrium price because
(A) higher price means fall in total revenue.
(B) higher price can be charged only on that segment of firm’s demand curve which is price inelastic implying that the marginal revenue will be negative.
(C) it is inconsistent with profit maximization goal under monopoly.
(D) marginal cost will be negative over the relevant range of output.
Answer: (A)

6. According to the Loanable Funds Theory, the rate of interest is a function of
(A) Investment
(B) Desire to hoard money
(C) Quantity of money
(D) All the above
Answer: (D)

7. While analyzing the marginal productivity theory of distribution,
Clark gave more emphasis on.
(A) Demand for Labour
(B) Supply of Labour
(C) Both Demand as well as Supply of Labour
(D) Profit Maximization
Answer: (A)

8. A general equilibrium is defined as a state in which all economic units maximize their respective objective functions, all prices are simultaneously in equilibrium and all markets are cleared. The statement is
(A) Correct
(B) Not correct
(C) Perfectly correct
(D) None of the above
Answer: (A)

9. According to Mundell in an optimum currency area, the achievement of internal and external balance is possible through
(A) Capital flows
(B) Inflow of funds from abroad
(C) Official development assistance
(D) The mobility of factors
Answer: (D)

10. An agreement between two countries to maintain a free trade area, a common external tariff, free mobility of capital and labour and degree of unification in government policies and monetary policy is called
(A) Common market
(B) Free trade area
(C) Economic union
(D) Customs union
Answer: (C)
11. The core principles of multi lateral trading system are :
I. Non-Discrimination
II. Reciprocity
III. Protectionism
IV. Domestic Safeguards
Select the right code from the list given below :
(A) I, II and IV are correct.
(B) II and III are correct.
(C) II, III and IV are correct.
(D) I and II are correct.
Answer: (A)

15. In which terms a unit of SDR was originally denominated?
(A) The world marked value of U.S. Dollar
(B) The gold value equivalent of one US Dollar
(C) The Pound-Sterling
(D) The German Mark
Answer: (C)

19. Given below are two statements, one labelled as assertion (A) and the other labelled as Reason (R).
Assertion (A) : India’s Public sector helped in the development of a sound industrial base.
Reason (R) : Public sector is under State control. The role of State in formulating appropriate policies and providing financial and other support has helped the public sector.
(A) (A) is correct, but (R) is wrong.
(B) Both (A) & (R) are correct.
(C) (A) is wrong but (R) is correct.
(D) Both (A) and (R) are wrong.
Answer: (B)

27. Assertion (A): During the financial year 2011-12, the Central Government is not likely to achieve the target of raising Rs. 40,000 crores through disinvestment policy.
Reason (R): Policy of increased public borrowings to bridge the fiscal gap is justified.
In the context of the above two statements, which one is correct from the given?
Codes:
(A) Both (A) and (R) are correct and (R) is the correct explanation of (A).
(B) Both (A) and (R) are correct but (R) is not the correct explanation of (A).
(C) (A) is correct but (R) is incorrect.
(D) (R) is correct but (A) is incorrect.
Answer: (A)

28. Arrange the following Reports in chronological order from the given codes:
I. Direct taxes Enquiry Committee Final Report
II. Final Report on Rationalizing and Simplification of the Tax Structure
III. Indian Tax Reforms-Report of a Survey
IV. Taxation Enquiry Commission
Codes:
(A) IV, III, II, I
(B) I, II, III, IV
(C) III, I, IV, II
(D) II, III, I, IV
Answer: (A)

30. In the equation C = C0 + C1 Yd, where C is planned consumption expenditure, Yd is disposable income, C0 is intercept or autonomous consumption (value of C when disposable income is zero), and C1 is marginal propensity to consume; which of the following is the endogenous variable?
(A) C0
(B) C1
(C) C1 Yd
(D) None of the above
Answer: (C)

33. Which of the following models of business cycle generates constrained cycles?
(A) Samuelson’s model
(B) Hick’s model
(C) Kaldor’s model
(D) All of the above
Answer: (B)

34. Which of the following is not an assumption of Harrod’s model of growth?
(A) The desired capital output ratio is constant.
(B) Savings are a constant proportion of real income in the economy.
(C) The labour force grows at some exogenously determined constant exponential rate.
(D) Factor prices are flexible in the long run.
Answer: (D)

41. According to the provisional figures for 2011 census, which of the following States has the lowest child sex ratio both in rural and urban areas?
(A) Uttar Pradesh
(B) Kerala
(C) Jammu and Kashmir
(D) Haryana
Answer: (D)

44. Growth process resulting into broad based benefits and providing equality of opportunity to all is referred to as
(A) Faster growth
(B) Inclusive growth
(C) Exclusive growth
(D) Sustained growth
Answer: (B)

47. Which of the following are not associated with the Leontief’s Static Model?
I. Final demand is a stochastic vector.
II. Reciprocal of the Perron- Frobinius root is the maximum growth rate.
III. Input coefficients are the fixed technological parameters.
IV. (I – A – RB)–1 WL = P
Select the correct code from the following:
(A) I, II, III
(B) I, III, IV
(C) I, III
(D) I, II, IV
Answer: (D) 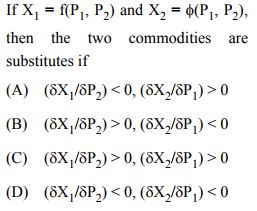 52. In an open economy model of input output analysis, if A is the input coefficients matrix and (I – A) is technology matrix, the following is the viability condition to be satisfied 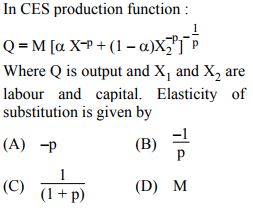 53. In Linear Programming problem involving two variables, multiple optimal solutions are obtained when one of the constraints is
(A) the objective function should be parallel to a constraint that forms boundary of the feasible region.
(B) the objective function should be perpendicular to a constraint that forms the boundary of the feasible region.
(C) neither (A) nor (B).
(D) two constraints should be parallel to each other.
Answer: (A)

57. The input coefficients/elements of which of the following matrices are interpreted as inputs required directly and indirectly per unit of final demand.
(A) A
(B) (I – A)
(C) (I – A)–1
(D) All of the above
Answer: (C)

61. Low productivity for agriculture in India is attributed to
(A) Poor irrigation facilities
(B) Heavy dependence on monsoon
(C) Absence of new technology
(D) All the above
Answer: (D)

63. Productivity of Indian agriculture can be enhanced by
1. Increased public investment
2. Increased irrigation facilities
3. Higher support price to the farmers
4. Shifting workers from industry to agriculture
Select the correct answer from the given codes:
Codes:
(A) 1, 2 and 4
(B) 1, 2 and 3
(C) 2, 3 and 4
(D) 3, 4 and 1
Answer: (B)

69. Which of the following did not contribute significantly to inflationary pressure in Indian economy in 2010-11?
(A) Food prices
(B) Prices of manufactured prices
(C) Fuel prices
(D) Metal and mineral prices
Answer: (B)

72. In dual gap model, the gap can be filled up by
(A) Raising the level of saving
(B) Export promotion
(C) Steady rate of growth
(D) Foreign aid
Answer: (D)

74. Which of the following represents the concept of human capital?
(A) Total human resources
(B) Total population
(C) Human resources gainfully employed in productive activities
(D) All of the above
Answer: (C)

75. Which of the following is disadvantageous to developing countries’ international trade?
(A) Protection
(B) Free trade
(C) Exports of primary and import of manufactured goods
(D) None of the above
Answer: (C)