7. Assertion (A) : Non-collusive model of Chamberlin asserts that a stable equilibrium can be reached if each firm charges Monopoly price and equally shares the market demand for their products.
Reason (R) : Reasoning is that the firms recognize mutual interdependence in terms of action and reaction with regard to price decision with the objective of profit maximization which will be realized if prices are determined at a level which equals marginal cost.
Codes :
(A) Both (A) & (R) are correct and (R) is the correct explanation of (A).
(B) (A) is correct, but (R) is not correct.
(C) Both (A) & (R) are correct but (R) is not the correct explanation of (A).
(D) (R) is correct, but (A) is incorrect.
Answer: (A)

8. The revealed preference approach to the derivation of indifference curve
(A) Assumes stability over time of an observed person’s tastes.
(B) Assumes that all people have identical tastes.
(C) Relies on repeated observations of the market behaviour of a single person.
(D) Is correctly described by both (A) and (C).
Answer: (D)

9. Which of the following statements does not hold true in case of the Keynesian Economics ?
(A) Velocity of money is an unstable function of its determinants.
(B) Labour is subject to money illusion.
(C) Aggregate supply function tends to become flat at levels of output well below full employment and to become steeper as full capacity is reached.
(D) Aggregate supply schedule is vertical, and output and employment are completely supply determined.
Answer: (D)

14. Which of the following is not a feature of the A.W. Phillip’s inflationunemployment trade-off relation ?
(A) A non-linear inverse relationship between unemployment rate and the rate of exchange in wage rate.
(B) There is a loop in the anticlockwise around the Phillip’s curve.
(C) The wage-inflation unemployment relationship is predictable.
(D) Philip’s curve shifts when expected rate of inflation shifts
Answer: (D)

17. Since March 2010, how many times the Reserve Bank of India has increased the repo rate ?
(A) Eleven times
(B) Thirteen times
(C) Ten times
(D) Twelve times
Answer: (B)

18. Which of the following Committees has been set up in India for identification of BPL families in urban areas ?
(A) Tendulkar Committee
(B) Saxena Committee
(C) Lakdawala Committee
(D) Hashim Committee
Answer: (D)

23. Which one of the following States had the highest number of branches of Regional Rural Branches (RRBs) in 2010 ?
(A) Bihar
(B) Haryana
(C) Madhya Pradesh
(D) Punjab
Answer: (A)

24. Growth of Indian agriculture has been slowed down since the adoption of new economic policy due to
1. low increase in crop yield
2. low or no public investment
3. stagnant green revolution technology
4. low retail market prices of agricultural produce
Answer this question by selecting the correct combination of codes given below :
Codes :
(A) 1, 2, 3, 4
(B) 2, 3
(C) 1, 2, 3
(D) 1, 4
Answer: (C)

26. Which of the following is not a specialized sub market of the money market ?
(A) Collateral loan market
(B) Discount market
(C) Bond market
(D) Acceptance market
Answer: (C)

29. Which of the following institutions are regulated by the RBI as All India Financial Institution ?
I. Export Import Bank of India
II. National Housing Bank
III. State Bank of India
IV. Small Industries Development Bank of India
Select the correct answer from the given code :
Codes :
(A) I, II and IV
(B) II, III, IV
(C) I & II
(D) III & IV
Answer: (A)

31. First Green Revolution was primarily concerned with the production and productivity of
(A) Pulses
(B) Oilseeds
(C) Wheat
(D) Fruits & vegetables
Answer: (C)

33. The main objectives of food management are
(A) Procurement of food grains from farmers at remunerative prices
(B) Distribution of food grains to consumers at affordable prices.
(C) Maintenance of food buffers for food security and price stability
(D) All of the above
Answer: (D)

34. Which one of the following States contributed maximum to the production of pulses in the year 2009-10 ?
(A) Uttar Pradesh
(B) Madhya Pradesh
(C) Rajasthan
(D) Punjab
Answer: (B)

36. Increase in agricultural production and productivity is a pre-condition
(A) to raise the share of agriculture in GDP
(B) to ensure national food security
(C) to provide livelihood and nutritional security
(D) All of the above
Answer: (D)

38. Which item is likely to be the most significant item of expenditure of the Central Government during 2011-12 ?
(A) Subsidies
(B) Defence
(C) Interest
(D) Share of States in Central taxes
Answer: (C)

44. The apex financial institution responsible for the development of small and micro industries in India is
(A) IDBI
(B) SIDBI
(C) NABARD
(D) None of the above
Answer: (B)

45. The general methods used to solve industrial disputes in India are
1. Collective bargaining
2. Compulsory arbitration
3. Adjudication
4. Decision by trade unions
Choose the correct combination of methods from this following :
(A) 1 and 2
(B) 2 and 3
(C) 2 and 4
(D) 1 and 3
Answer: (D)

46. Given below are two statements, one labelled as Assertion (A) and other labelled as Reason (R) :
Assertion (A) : Information Technology (IT) industry is a ‘high knowledge” based industry that has developed rapidly, mainly on its own merits in India.
Reason (R) : Industry that is based on high knowledge does not need any significant support from the Government nor there is much scope for outside interference.
Choose the correct combination of codes given below :
Codes :
(A) (A) is correct, but (R) is wrong.
(B) Both (A) and (R) are correct.
(C) (A) is wrong, but (R) is correct.
(D) Both (A) and (R) are wrong.
Answer: (B)

49. Under the post 1991 economic policies, the Government of India supports
(A) Private manufacturing sector
(B) Export industries
(C) Small industries
(D) All the above
Answer: (D)

53. Which of the following hypotheses are tested by a regression function ?
(A) Inter-relation between two or more variables is significantly different from Zero.
(B) The degree and direction of inter relations between two or more variables are non-zero and goodness of fit of the regression function is satisfactory.
(C) Degree of influence exercised by systematic explanatory factors is greater/lesser/equal to the influence exercised by random factors.
(D) All the above
Answer: (D)

54. In the presence of Heteroscedasticity, which of the following is not a correct statement ?
(A) Heteroscedasticity does not alter the unbiasedness and consistency properties of OLS estimators.
(B) OLS estimators are of minimum variance or efficient
(C) BLUE estimators are provided by the method of weighted least squares.
(D) ‘t’ and ‘F’ tests based on standard assumptions of classical linear regression model may not be reliable.
Answer: (B) 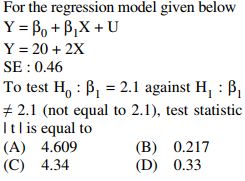 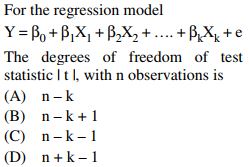 62. The act of simultaneously buying a currency in one market and selling in another market is called
(A) Speculation
(B) Spotting
(C) Forwarding
(D) Arbitrage
Answer: (D)

63. All internationally traded services are covered under which of the following WTO agreements ?
(A) GATS
(B) TRIPS
(C) TRIMS
(D) PTA
Answer: (A)

64. The Bretton – Woods system
(A) set up a code of rules for nations to follow their conduct of international trade
(B) set up borrowing facilities for nation’s temporary balance of payments problems
(C) Evolved over the years in several important ways
(D) All of the above
Answer: (D)

65. Full employment and balance of payments equilibrium will be automatically achieved in an optimum currency area
(A) if exchange rates are flexible
(B) foreign capital flows into the country
(C) if labour and capital move freely
(D) if trade is liberalized
Answer: (C)

72. Assertion (A) : The new endogeneous growth theory examines production function that shows increasing returns.
Reason (R) : Because of specialization and investment in knowledge capital.
(A) (A) is true, but (R) is false.
(B) (R) is true, but (A) is false.
(C) Both (A) and (R) are correct, but (R) is not the correct explanation of (A).
(D) Both (A) and (R) are correct and (R) is the correct explanation of (A).
Answer: (D)