1. For an overcast day or night, the atmosphere is
(A) Stable
(B) Neutral
(C) Slightly stable
(D) Unstable
Answer: (B)

9. Cells grown in a medium containing phosphorous –32 will show radio labelling in
(A) Starch
(B) Glycogen
(C) Proteins
(D) Nucleic acids
Answer: (A)

12. “Double digging” is a method of
(A) Bio-intensive agriculture
(B) Deforestation
(C) Aforestation
(D) Water conservation
Answer: (A)

13. The rate of replacement of species along a gradient of habitats pertains to
(A) Alpha diversity
(B) Beta diversity
(C) Gamma diversity
(D) Species diversity
Answer: (B)

15. If individuals of a species remain alive only in captivity or other human controlled conditions, the species is said to be
(A) Ecologically extinct
(B) Mass extinct
(C) Wild extinct
(D) Anthropogenic extinct
Answer: (C)

21. Vegetation cover shows maximum reflectance in which of the following regions of the electromagnetic radiation spectrum?
(A) Ultraviolet
(B) Near infrared
(C) Middle infrared
(D) Visible
Answer: (B)

22. During remote sensing of the vegetation cover, the spectral reflection of vegetation over electromagnetic radiation spectrum depends upon
(A) Pigmentation in the leaf
(B) Structure of the leaf
(C) Moisture content of the leaf
(D) All the above characters
Answer: (D)

23. Given below are statements in the context of biogeochemical cycles:
(i) Ecosystems are black boxes for many of the processes that take place within them.
(ii) Ecosystem boundaries are permeable to some degree or other.
(iii) The energy and nutrients can be transferred to and from one ecosystem to another via imports and exports.
Identify the correct answer from the codes given below:
(A) (i) & (ii) only
(B) (ii) & (iii) only
(C) (i) & (iii) only
(D) (i), (ii) and (iii)
Answer: (D)

30. Which of the following material has the highest hydraulic conductivity?
(A) Clay
(B) Sandstone
(C) Limestone
(D) Quartzite
Answer: (B)

31. Which of the following energy sources is not renewable on human time scale?
(A) Solar
(B) Hydrothermal
(C) Geothermal
(D) Biomass
Answer: (C)

35. In nuclear thermal reactors, which of the following is not used as moderator?
(A) Normal water
(B) Heavy water
(C) Graphite
(D) Liquid Helium
Answer: (D)

38. Which of the following causes warming of atmosphere but cooling of the earth’s surface?
(A) Ozone
(B) Black carbon aerosols
(C) All Greenhouse gases
(D) Sulphates and nitrates
Answer: (B)

46. Which of the following organic compounds is not of biogenic origin?
(A) Isoprene
(B) α-pinene
(C) Myrcene
(D) Acrolein
Answer: (D)

47. Which of the following is used as plant indicator for detection of presence of SO2 and HF in air?
(A) Lichen
(B) Orchid
(C) Apricot
(D) Tobacco
Answer: (A)

48. Integrated Gasification Combined Cycle (IGCC) technology is best at removing
(A) NO2 and CO
(B) CO and SO2
(C) Particulates and sulphur
(D) NO2 and SO2
Answer: (C)

53. A drawback of checklists is
(A) Preliminary analysis is available in scaling checklist
(B) Checklists are too general or incomplete
(C) Checklists summarises information to make it available to experts
(D) Ecosystem functions can be clearly understood from weighting methods
Answer: (B) 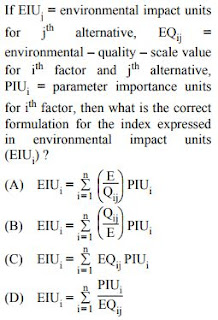 56. Risk assessment in EIA does not involve
(A) Maximum credible analysis
(B) Hazard and operability studies
(C) Preparation of disaster management plan
(D) Assessment of economic benefit arising out of a project
Answer: (D)

73. Environmental ethics deal with moral relationship of human beings to
(A) the value and moral status of the environment and its nonhuman contents
(B) the values that is important to development and economic growth
(C) the conservation values of selected species
(D) the development of genetically modified organisms
Answer: (A)