1. Most of the day to day weather changes are associated with which scale in meteorology?
(A) Micro scale
(B) Meso scale
(C) Synoptic scale
(D) Planetary scale
Answer: (C)

11. The most toxic among the chlorinated hydrocarbons is
(A) Aldrin
(B) DDT
(C) Endrin
(D) Heptachlor
Answer: (C)

16. Coagulation is a chemical process, in which charged particles or colloids undergo
(A) Stabilization
(B) Destabilization
(C) Attraction
(D) Precipitation
Answer: (B)

28. Which of the following is not a major biome of India?
(A) Tropical rain forest biomes
(B) Tropical deciduous forest biomes
(C) Temperate needle leaf forestbiomes
(D) Mountains and glaciers
Answer: (D)

29. To survive and avoid competition for the same resources, a species usually occupies only part of its fundamental niche in a particular community orecosystem. This is called
(A) Geographic isolation
(B) Mutualism
(C) Realized Niche
(D) Broad Niche
Answer: (C)

34. Cellulose and hemicellulose are not resistant to decay but are broken down more slowly. They are considered
(A) Labile
(B) Moderately labile
(C) Recalcitrant
(D) Nonlabile
Answer: (B)

39. Geothermal gradient in Earth is
(A) Uniform throughout.
(B) Higher in continental lithosphere.
(C) Higher in subduction zones.
(D) Lower at mid oceanic ridges.
Answer: (B)

42. What led to maximum number of fatalities during Indonesian 2004 Earthquake?
(A) Death on account of openings on surface
(B) Fires generated due to earthquake
(C) Epidemic diseases
(D) Tsunami
Answer: (D)

44. The highest seismic domain in India is
(A) The Himalayas
(B) The Western Ghats
(C) The Indogenetic plains
(D) The Dhār war craton
Answer: (A)

54. Which of the following statements is correct in the context of Environmental Impact Assessment?
(A) The process considers broad range of potential alternatives.
(B) It provides early warning of cumulative effects.
(C) Focuses on sustainability agenda.
(D) Focuses on standard agenda.
Answer: (D)

56. Among the following, which one does not belong to EIA process?
(A) Establishment of base line environmental condition.
(B) Identification, Prediction and assessment of impact.
(C) Suggesting the mitigation measures.
(D) Developing EMS auditing procedures.
Answer: (D) 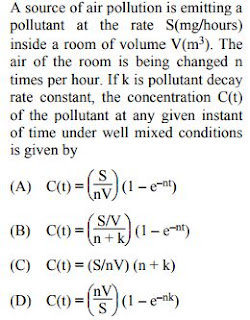 60. Which one of the following is not an eigen value of the matrix ? 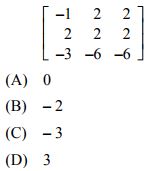 65. Which one of the following environmental factors is responsible for cyclomorphism in animals?
(A) Moisture
(B) Temperature
(C) Photoperiod
(D) Wind
Answer: (B)

66. Sr90 can enter and accumulate in the body through
(A) Drinking water
(B) Inhaling contaminated air
(C) Food chain
(D) Skin
Answer: (C)

72. “Farmer’s lung” is a classic example for
(A) Psittacosis
(B) Extrinsic allergic alveolitis
(C) Legionnaire’s disease
(D) Aspergillosis
Answer: (B)

75. Which of the following rivers has maximum melt water component in its discharge?
(A) Indus
(B) Ganges
(C) Brahmaputra
(D) Narmada
Answer: (A)